T-shirt you can wear for 10 years and ‘grows’ with you,
"KABURI"

Having been attracted to rock culture since he was in his teens, Sangou Kikuta has lived much of his life clad in a leather jacket. From playing in bands, lazing around doing not much of any-thing all the way through to training in the art of design, whatever he was doing he was always wearing a leather jacket. And what better to go underneath that jacket than a regular old t-shirt? In his 20s he used to wear all sorts of t-shirts, from his beloved Metallica band tee through to the showy graphic tees he made with his own brand ‘Scribble Junkie’. However, as he reached his 30s, the decision on exactly what kind of t-shirt to wear under his leather jacket became more and more of a problem. Without realizing it, Kikuta had grown up, and what he wanted from his clothes was a more ‘simple’ style.

A t-shirt that he could wear and take pride in for the rest of his life.

T-shirts are a kind of underwear. With this in mind, t-shirts are made to be comfortable, crafted from a soft fabric that stretches gently to fit the wearer. Of course these garments are made to last too, however that doesn’t mean that being built to last is their sole purpose. There’s a school of thought that believes old, worn-out clothes actually look cool, and so this underlying notion exists within these shirts. But could it be possible that just like a leather jacket there’s a shirt that ‘matures’ with age, a shirt that ‘grows’ with you? With this notion at its core, the brand “SANGOU” has been born.
The fabrics used are all tradi-tional “Orimono” textiles. This is the very same fabric that is used in the production of “kimono” - the word used to describe the traditional Japanese garment, which literally means “thing to wear”. The reason behind using this textile is that this fabric, just like leather and denim, ‘ma-tures’ the more it is worn. “Ise-Momen” Japanese cotton textiles get softer and the feel of the fabric more comfortable the more you wash them and the more you wear them. Just like a leather jacket, this is a fabric you can wear and live with for 10 years or more.

However, these traditional textiles aren’t really made with the production of t-shirts in mind, as they don’t really stretch that much. The first samples that were made tended to split at the seams under the arms and across the back, the places where people move their bodies and tension occurs. This led to Kikuta thinking about exactly how people move. How could these shirts be made more comfortable to wear? After thorough study of how people move a whole new batch of samples were made. How could this “Orimono” textile be made into a t-shirt that is comfortable to wear? With ‘ease of use’ and ‘durability’ as the most important qualities, Kikuta added a stretchable fabric at the seams and tried different kinds of drapery but unfortunately the results were the same - the fabric ripped in just the same way.

It appeared that “Orimono” fabric just isn’t the fabric from which to make t-shirts. For a while Ki-kuta experimented with different ways of using the fabric, having much larger openings in it to decrease stress at the seams - and then one day he remembered the holes around the armpit areas on women’s kimonos. After some research he discovered that this small opening below the armpit where the sleeve meets the bodice had an actual name - “Miyatsuguchi” in Japanese. This “Miyatsuguchi” has the sole purpose of making movement easier whilst wearing a garment made of “Orimono” fabric. This was it! Kikuta then experimented with incorporating a small “Miyatsuguchi” into his shirts, with the result that movement became much easier. Success - the wisdom of our ancestors can be a wonderful thing. By using this traditional Japanese method Kikuta had finally reached his goal of making a “shirt you can wear for 10 years”. He decided to name this range “Kanmurikoromo - Kaburi” (literally “Peerless Clothes to put on” in English). The idea of “putting on” a garment over one’s head being part of the thinking behind the name, with this being linked to the idea of wanting to wear a traditional “kimono” but in a more carefree, casual way. Traditional Japanese clothes aren’t really meant to be worn in such a carefree manner, and perhaps that’s part of their charm, but Kikuta believes that to have a ‘kimono’ that can be worn casually is something quite charming. This “Kanmurikoromo - Kaburi” is this idea come to life. A casual kimono, a kimono that can be worn with denim and leather.

A shirt that grows with you, that becomes more comfortable - “Kanmurikoromo - Kaburi”. This “style” that you can wear for 10 years is something that should definitely be tried at least once. 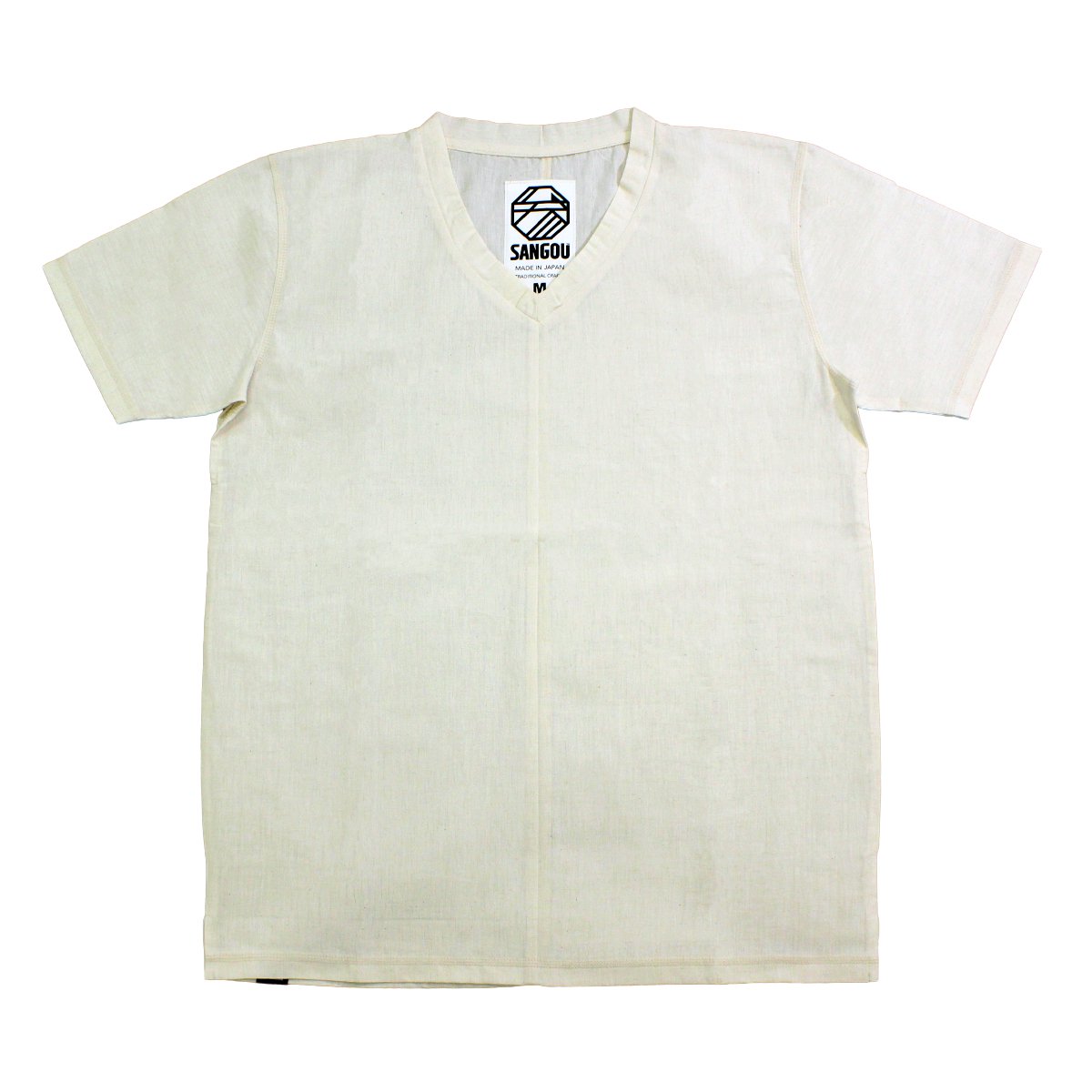 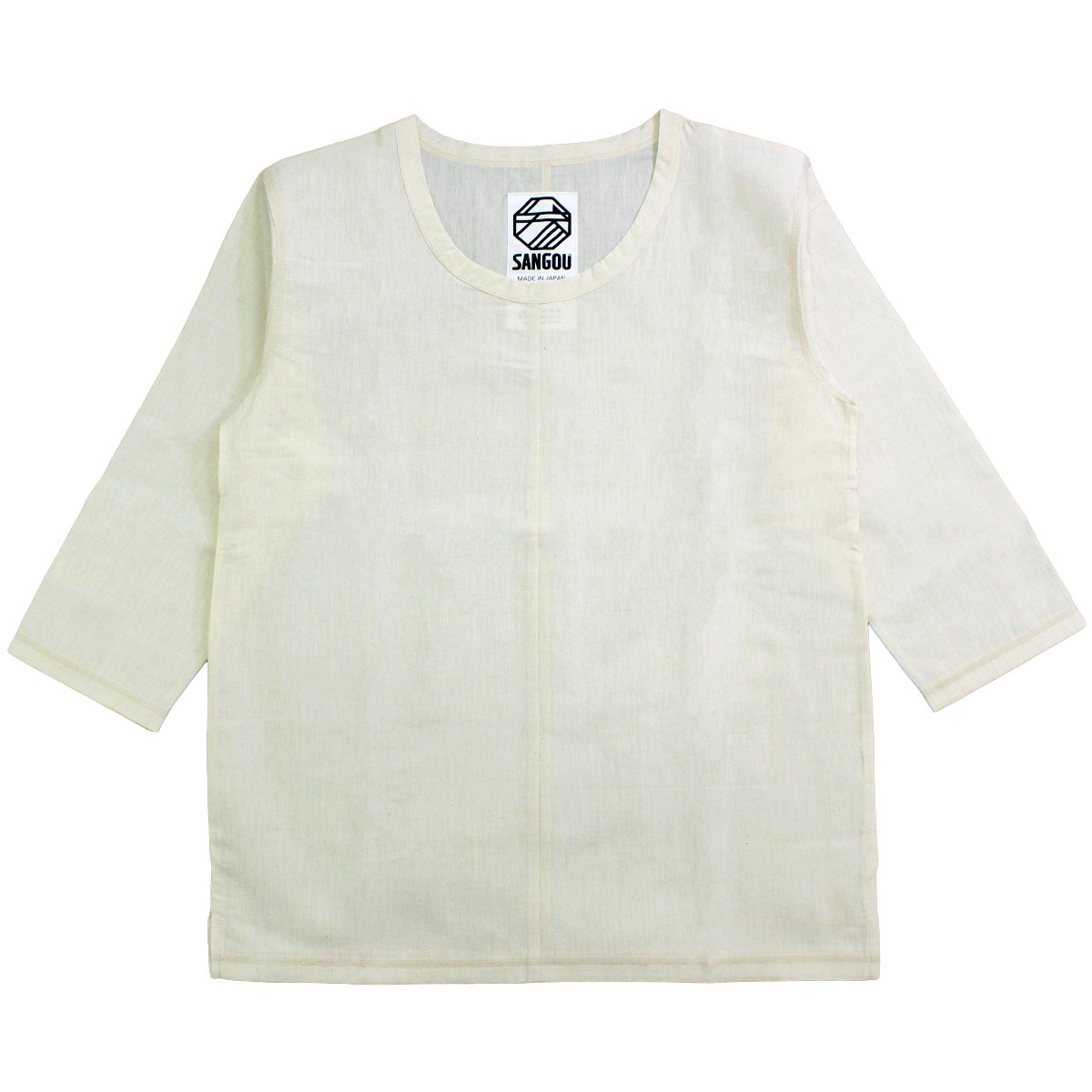 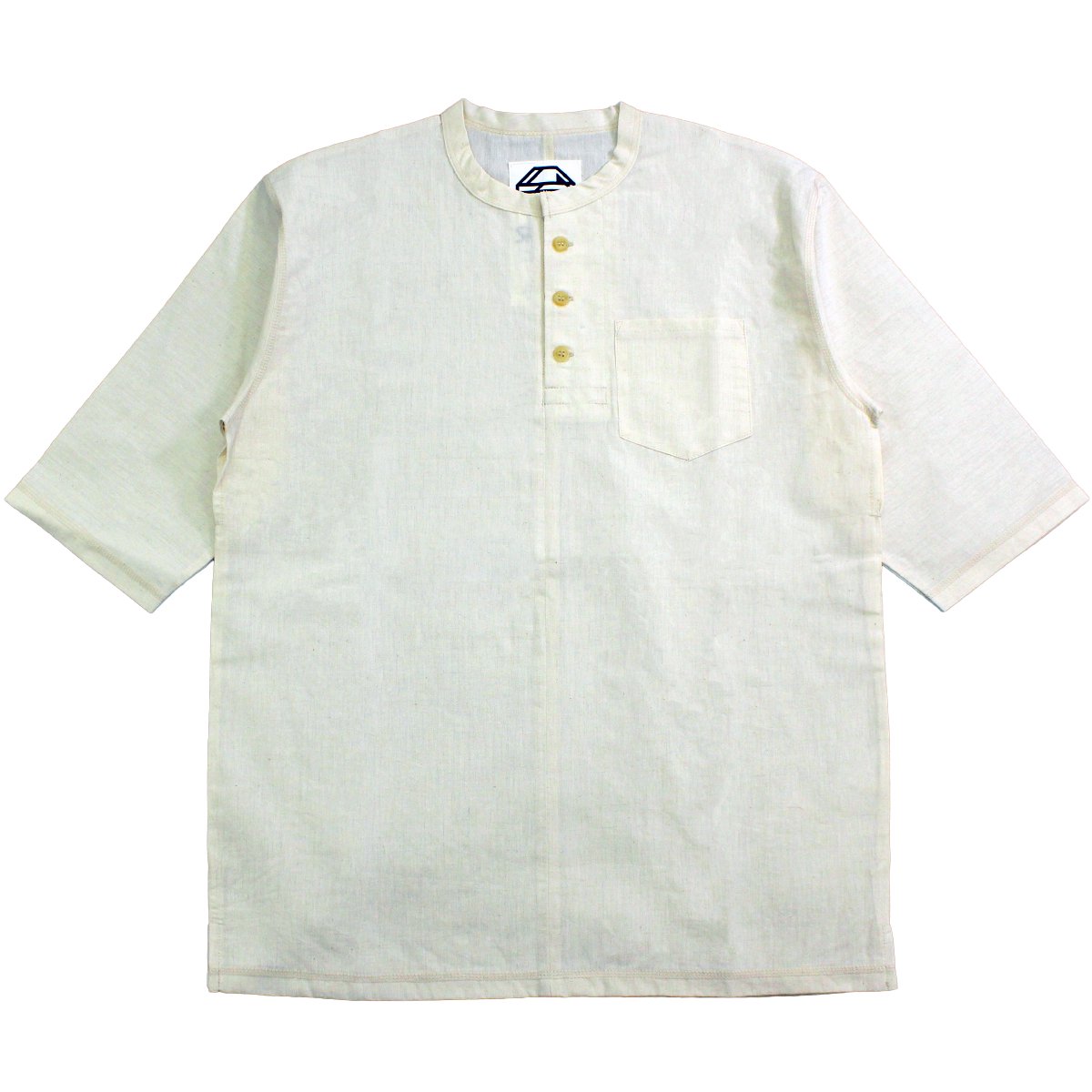 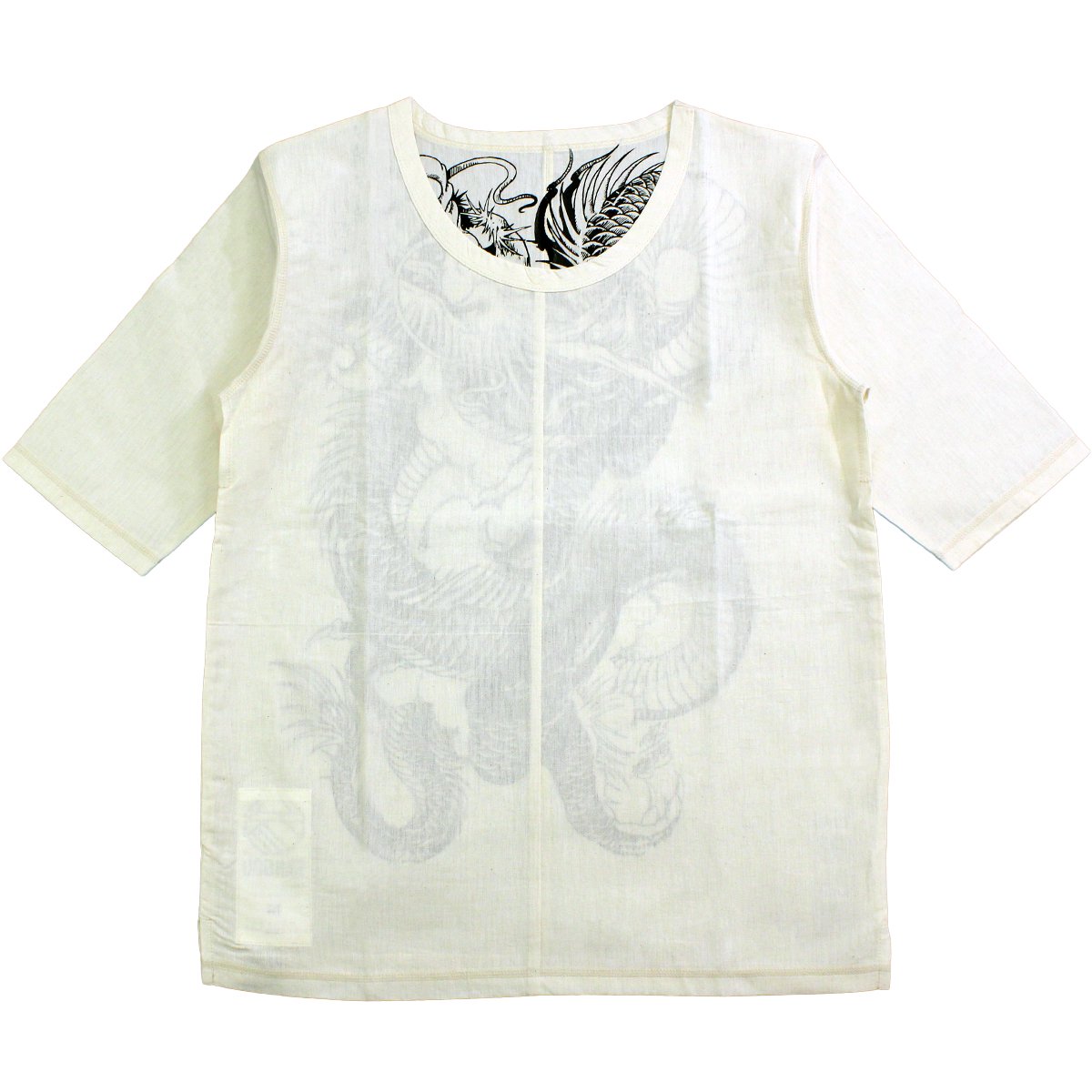 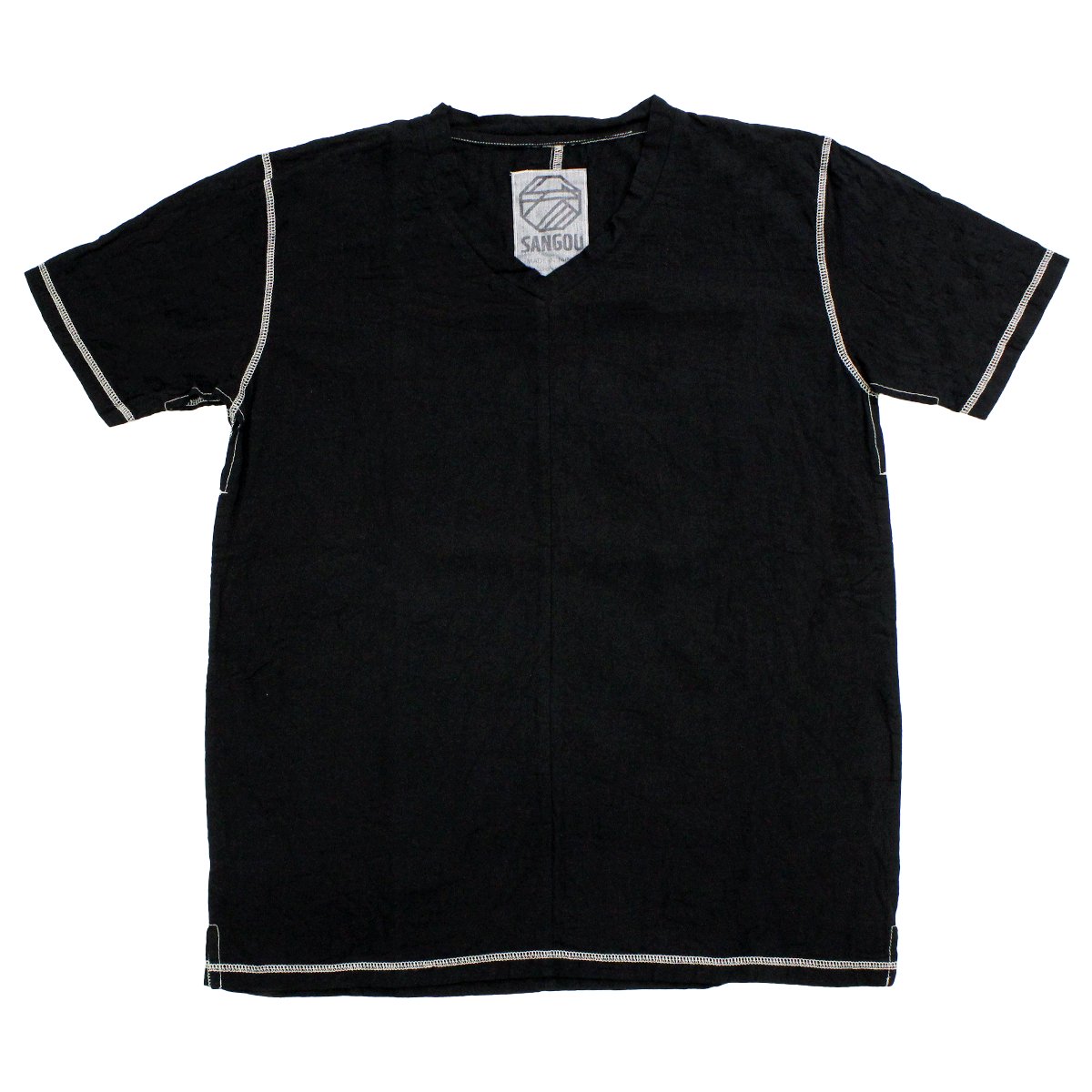